The Solus Project was created by Sjoerd "Hourences" De Jong and has been in production since July of 2013. He created the game using the Unreal 4 engine and is currently working with Teotl Studios, the same studio that developed the game The Ball. This game is considered the "Spiritual Successor" and is very similar in many ways. The game will be published by GripGames and will be available on Steam and XBox One. No release date has been scheduled but playable demos of the game were seen at recent conventions (early to mid 2015).

Overview A single player exploration and survival experience, played in first person and developed in Unreal Engine 4. Set on a mysterious and uninhabited alien planet. Earth is on the brink of destruction and players are sent to explore a distant planet. After years of space travel you arrive but experience a catastrophic landing.

Team members perished in the crash and all of the equipment was destroyed, leaving players with no way to communicate or get help from Earth, provided it still even exists. Players must learn to survive through exploration and finding the secrets hidden within the planet. Delve into vast cave systems and uncover over 200 secrets.

The Atmosphere is is fully dynamic with a day and night cycle and a weather system that calculates temperature, humidity and wind. Plants respond to the climates, storms form, the oceans have tides based on the moon phases and earthquakes can happen. Players will need to learn to survive heat, cold, storms, meteors, lack of sleep, humidity and anything else the planet has to offer. Death could mean the end of mankind.

Add a photo to this gallery 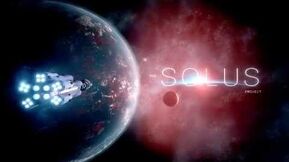 The Solus Project E3 Announcement
Add a photo to this gallery
Retrieved from "https://the-solus-project.fandom.com/wiki/The_Solus_Project?oldid=4148"
Community content is available under CC-BY-SA unless otherwise noted.